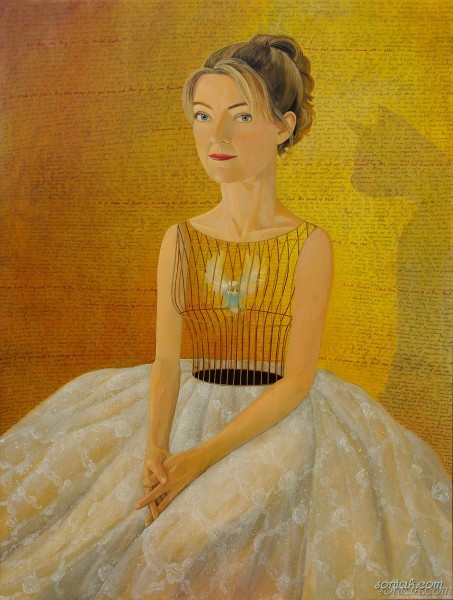 My portrait of author Cassandra Golds was selected as a finalist for the 2011 Archibald Prize. From the AGNSW website:

Kretschmar first became familiar with Golds’s work when she was commissioned to illustrate the cover of her novel Clair-de-Lune for Penguin Books in 2004. Since then she has illustrated two other novels by Golds: The museum of Mary Child (2009) and The Three loves of Persimmon (2010).

‘After getting to know her (via Facebook), and in celebration of her recent achievements of being shortlisted for both The Prime Minister’s Literary Award and The NSW Premier’s Literary Award, I thought the time was right to paint her portrait,’ says Kretschmar. ‘I met with her a couple of times last October, and had the chance to do some sketches as well as mull over the best way to represent her.

‘Reading a passage from her latest novel The three loves of Persimmon, I was struck by the lines: “Persimmon gazed at him. For a moment she had the strangest feeling that there was a bird trapped inside her ribcage, as if her bones were its prison and it was flapping frantically against them, trying to get out. She opened her mouth, but could find no words.”

‘As birds, and cages, and cats all seem to be recurring themes in her work, those lines were the perfect catalyst for my concept,’ says Kretschmar. ‘Dressing her in a voluminous lace skirt seemed an apt reflection of her “other time, other worlds” sensibility. The lines of text in the background are also taken from The three loves of Persimmon, which, coincidentally, describes the meeting of the main character with a young male artist who offers to paint her portrait “for an Art Prize”. In a sense I think this portrait has been willed into existence on behalf of both of us!’”